The staging of the York Mystery Plays is one of the city’s greatest literary and theatrical traditions and is a hugely popular part of York’s cultural heritage.

York Festival Trust is a charitable company, incorporated in 1979, that has staged the Mystery Plays on the streets of York on behalf of the city’s historic Guilds every four years since 1998 and is the only organisation currently staging large scale productions on a regular basis.

In medieval times, the Guilds would present the plays on moving pageant waggons, parading through the city streets from one location to another. Trade guilds arose in the 14th century as craftsmen united to protect their common interest. In 1415, there were 96 (?) craft guilds; there are now just eight – five that date back to the 14th and 15th centuries, two formed in the 1950s, with the Guild of Media Arts becoming the city’s eighth guild at the end of 2015.

On behalf of the Guilds, the registered charity has raised funds to cover the practicalities of presenting plays on waggons through York’s higgledy-piggledy streets, bringing spectacle and high-quality drama to the city centre.

The Trust, through the Wagons Plays Board, looks after the core planning and oversees associated financial, legal, technical and logistical issues. It employs a professional pageant master, director of music, and an events manager to produce the quadrennial plays and liaises with hundreds of enthusiastic amateurs from the Guilds, local schools, church communities and community theatre groups.

As well as producing the Mystery Plays every four years, York Festival Trust is also held in high regard within the academic world and regularly holds conferences that bring together an international community of scholars, who have made the study of the York Plays their life’s work, with local academics to share insights and ideas.

In 2010, York Festival Trust negotiated with the British Library to have the sole surviving copy of the original manuscript of the York Mystery Plays loaned to York Art Gallery for display during an exhibition on the world-famous plays. 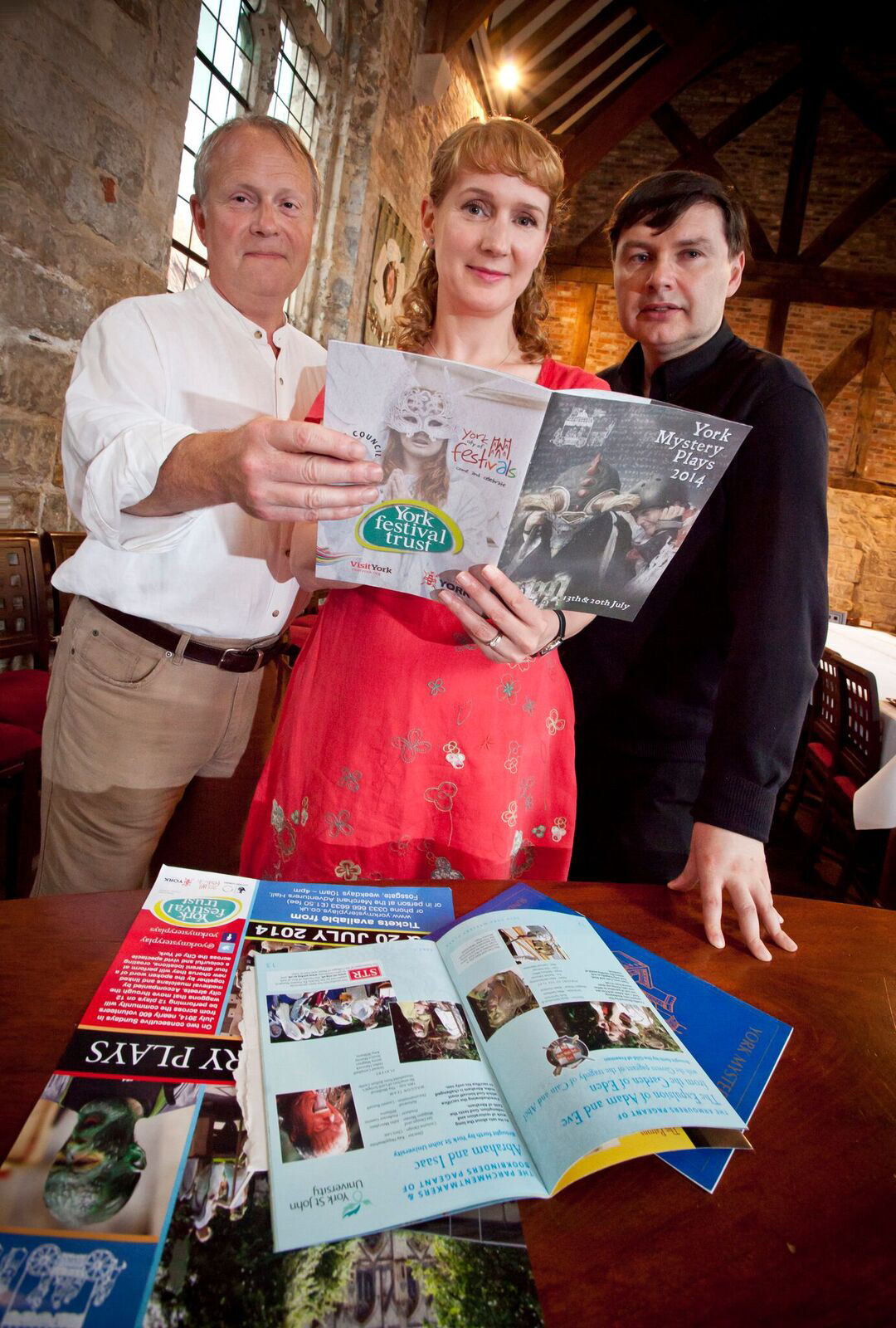 York Mystery Plays are a collection of individual plays that tell the story of the Bible, from the Creation to the Last Judgement, with each play covering a biblical episode.

They were traditionally performed during the Feast of Corpus Christi, a festival held between late May and the middle of June to celebrate the Eucharist as the body of Christ.

It’s not known who wrote the plays, but some historians believe that many were written by the same author, who was perhaps a member of one of the Guilds. 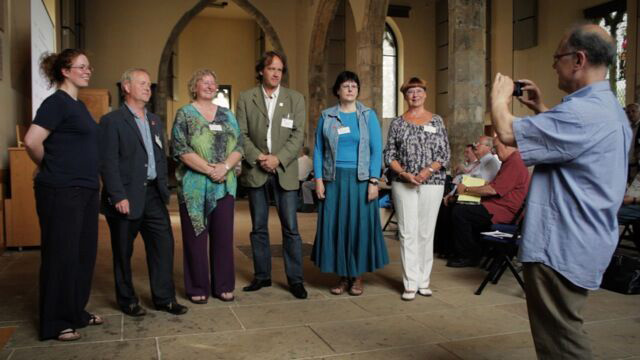 In 2012 the Trust established a National network of Mystery Plays, including Lincoln, Lichfield, Gloucester & Chester.

Traditionally, they were performed on decorated waggons that moved about the city to allow different crowds to watch each play. Originally, 48 plays were performed by 48 different guilds, making one ‘cycle’ of Mystery Plays. The entire cycle could take up to 20 hours to perform and could be spread over a number of days.

Guilds would perform stories relevant to their work; for example, the Shipwrights performed the Building of the Ark, while the Butchers played the Death of Christ or Crucifixion. The Guild waggons would made their way down Micklegate Hill, across Ousebridge, down Coney Street to the Guildhall, down Stonegate to the Minster gates and finally down Petergate to the Pavement. 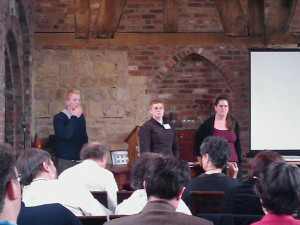 The Trust works alongside young Academics to provide new insights into the Mystery Plays.

After a run of nearly 200 years, the plays were confiscated during the Reformation with the final medieval production in 1569.They stayed dormant for around 400 years, during which time many of the Guilds which had supported had ceased to exist.

In 1994, Yorkshire theatre historian Jane Oakshott worked alongside the Friends of York Mystery Plays, the Centre for Medieval Studies at the University of York and the York Early Music Festival to direct the first processional performance of the plays in modern times in York.

Oakshott approached the Guilds to bring to their attention the heritage of the Mystery Plays and since 1998, the plays have been performed by the Guilds on waggons every four years – filling the city streets with drama and spectacle and offering a truly unique experience for visitor and locals. The plays are performed from noon until early evening on two Sundays in July.

York Festival Trust has taken responsibility for preserving the waggon play tradition for the community of the 21st century. By staging the plays in their original performance context on wagon, it not only recognises and respects tradition, but makes a very real contribution to the present by creating an engaging, personable experience for York and its communities.

At the same time as preserving the performances of the York Plays as a cultural, devotional and theatrical phenomenon, York Festival Trust believes the values of modern production can open the subject to a wider discussion.

The popularity of Mystery Plays in general has grown over the last few years with groups in Chester, Coventry and Litchfield regularly performing their own plays. In Lincoln, Durham, Aldermarston, Gloucester, Manchester and Cardiff, plays have either been borrowed from other cities or new scripts created from original texts.

In an attempt to learn more about this phenomenon and to bring performing groups together to share experiences and learn from each other, York Festival Trust holds regular conferences and attends events. Previous events have been attended by local mystery play practitioners, early drama enthusiasts from other towns and cities across the UK, as well as academics from across the world.

In 2016, the Trust took part in the International Conference on Medieval Drama at Durham University in 2016 and funded the remounting of the 2016 production of the Crucifixion and Death of Christ as part of the wider Theatrum Mundi festival. Dr. Heather Mitchell-Buck and Tom Straszewski both gave talks on the ongoing life of the York Mystery Plays.

In 2013, Dr Mariana Lopez, a researcher in the fields of acoustical heritage and sound design at Anglia Ruskin University in Cambridge, completed a PhD at the University of York on the importance of acoustical studies in relation the York Mystery Plays. Her research allowed visitors to the 2014 staging of the York Mystery Plays explore how the acoustics of the street spaces and different staging configurations might have affected the spoken and sung items of the plays and, in 2016, her work was displayed at the Being Human festival in London. Her Soundscapes project allows worldwide audiences to experience the recreated soundscapes of the York Mystery Plays.

In 2014, the Trust commissioned York novelist Helen Cadbury to write two new 20-minute Mystery Plays, which were performed by members of the York Theatre Royal Youth Theatre groups to mark the start of the 2014 Mystery Plays. This engagement with modern interpretations continues with a collaboration between the Trust and Script Yorkshire to provide plays for Riding Lights Youth Theatre’s performance term. 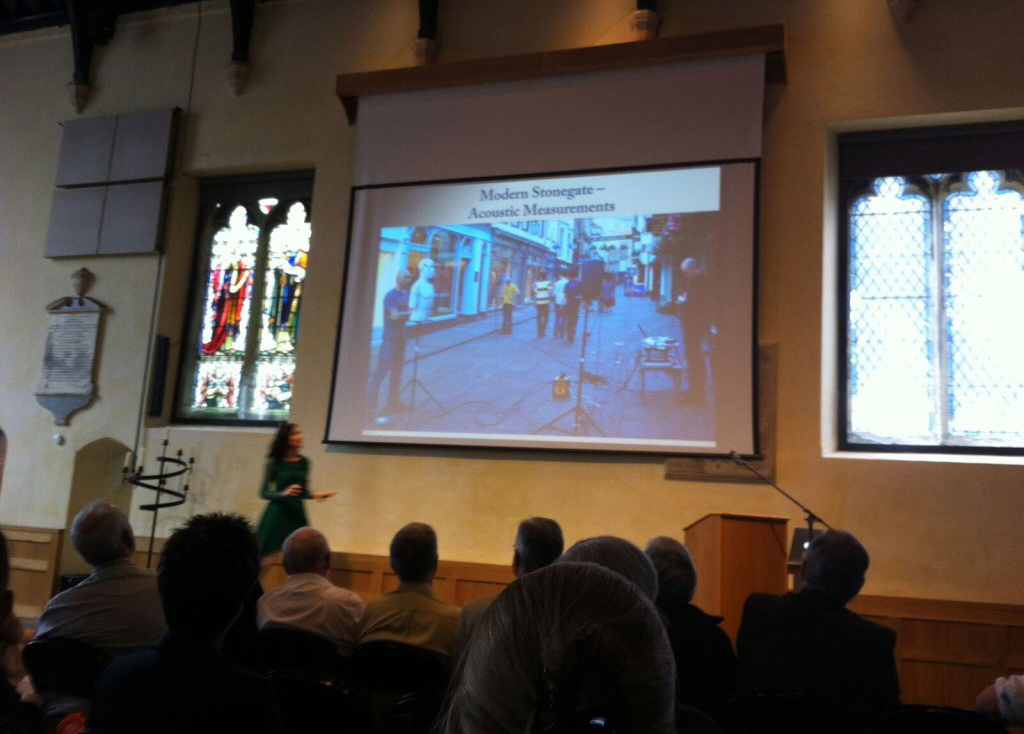 The Trust encompasses modern technology to bring history into the present. Here Mariana Lopez is talking about how the Plays would have sounded to a Medieval audience using digital technologies.

Further afield, since 2009 the Trust has worked with The Associazione Culturale, a community group from the small town of Orsogna in the Abruzzo region of Italy which has its own version of Mystery Plays called the Talami. In a successful cultural and artistic exchange, the Trust has enjoyed exchange visits, including in 2011 a trip that saw members of York Guilds take part in the Italian performances and then in 2012 the Company of Butchers and St Chads took the Crucifixion wagon to perform in Italy. Members of Italian group visited for the 2014 production and one of their performances was included.

The Trust is also working with engineering students at York College to design and produce modern wagons suitable for the pageant performances. The Trust continues to preserve York’s Mystery Plays as part of our shared heritage, whilst helping to establish new traditions and approaches.

Our next production is in 2022

Timeline of the Trust through the years 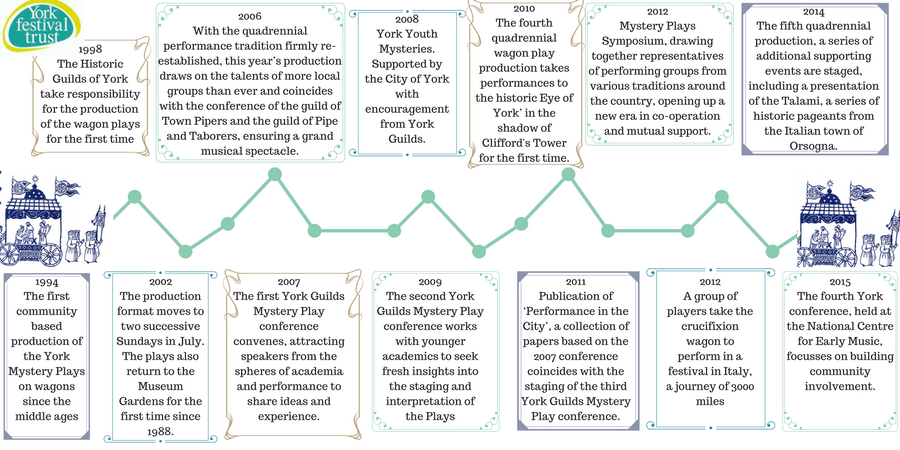