Guest Blog: The Glovers Play – The Sacrifice of Cain and Abel 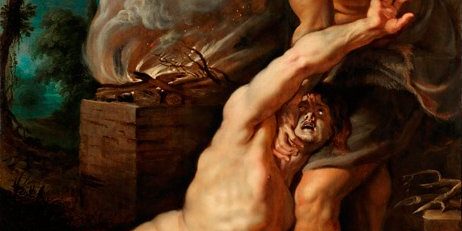 What’s this play about?

The play is the 7th play out of the 48 York Mystery Plays and was originally produced by the Glovers guild. This production tells the story of Cain and Abel, the sons of Adam and Eve and the murder of the first man. The story is dated as far back as the first century BC.

Cain, the first-born son of Adam and Eve, was a farmer, while their second son Abel, was a Shepard. The brothers would both make sacrifices to god to appease him from their own produce, however, God would show favour towards Abel’s sacrifices causing Cain to feel great jealousy and hate. Although the reasons for Gods displeasure of Cain’s offerings are not directly revealed, it is believed to be because of Cain’s lack of faith within his heart.

Incensed and with hatred in his heart, Cain would ask his younger brother to join him in the field only to murder him. God, knowing what he had done, would ask Cain where his brother was only for him to reply “I do not know, am I my brother’s keeper?”.

This response by Cain has come to symbolise people’s reluctance to accept responsibility for the welfare of their fellow man. While we cannot be the keeper of others in our absence, Christianity believes we have a collective responsibility to care for others when we can and not commit or allow acts of violence if we can prevent such.

As a punishment for Cain’s act, God cursed Cain to wander the lands while marked to prevent others from killing him. The mark itself

was debated as to what form it took or its meaning. It is believed by many to have served as a warning and deterrent to others for similar acts of violence.

You can enjoy this portrayal as well as all 10 others on the 9th, 12th and 16th of September 2018 where traditional wagons will be taking to the streets or if you fancy a quiet enclosure away from the city, the plays are also enclosed on the stage.

If you wish to learn more about the history of Christianity or other prominent religions, more info is available at: https://learndojo.org/gcse-revision/