Who’s behind the York Mystery Plays? 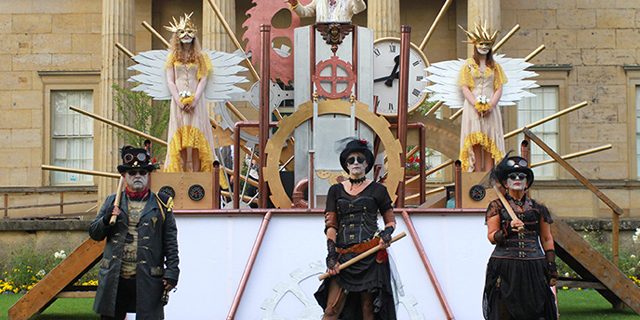 This month we look at the people who make the York Mystery Plays happen. Outside of the core team of Pageant Master, Project Administrator and Chair of the Trust, there are hundreds of individuals from across York and further afield who direct, perform, create and otherwise make the plays happen!

In May, a civic ceremony takes place for the presentation of the billets, by which the Lord Mayor of York commands the Guilds and directors to “bring forth” their play. This year there are eleven directors, one for each play. Their role is to make sure the actors are ready to perform, having rehearsed over the months running up to the performances. Some are drawn from the ranks of former waggon play actors, who bring a wealth of experience “on the job” to this unique performance style. Others are recruited (or conscripted!) from York’s community theatre scene. Whilst there is a camaraderie between them, there’s also a sense of rivalry- each wants to make sure their play is the best!

If the directors make sure the actors are there and ready to perform, it’s the waggon masters who make sure there’s something to perform on. Traditionally the York Mystery Plays are performed on ancient farm waggons. These cumbersome beasts roll through the streets of York, sets, backdrops and props mounted on their backs. The pageantry and spectacle of the Mysteries depends on the work of the waggon masters in preparing their waggons and teams. They also make sure the demands of Health and Safety are complied with!

The York Mystery Plays rely on the generosity of farmers, museums and private individuals to supply the waggons for the plays. When there’s a shortfall, the directors and waggon masters put their brains together to work out alternatives. In the past, there have been performances on pick-up trucks, hand carts and more. This year, we expect to see a variety of new approaches to what a waggon might be for a modern audience, as long as it is something that provides a moving platform for pageantry and performances.

Do you have a waggon lurking in your barn? If so, we want to hear from you! Contact us to let us know here!

The waggons won’t roll on their own. Teams of pushers help move the waggons through the streets. Sometimes these are groups of scouts, cadets or guild members. Other groups are formed by anybody who wants to get involved in the plays. If you’re ready to push (and occasionally pull), the groups will want to hear from you so please contact us!

Are you a beggar? A prophet? An angel? A devil? All these parts, and more, are played by actors from across the city. Rehearsing throughout the summer, they learn their lines, practice their moves and prepare to perform. On the day, they perform four times, once at each playing station.

Finally, we need a heavenly host of costumiers, carpenters, prop-makers and painters who help put together sets, sew costumes, find props and raise funds for the plays. Without them, the actors will be naked, the waggons empty and the audiences disappointed. The community of the York Mystery Plays depends on people to step up and become a part of this historic tradition. If you’re interested, please get in touch here.

None of the hard work would be worth the effort if it wasn’t for the audience who come to watch the plays. Whether you’re on the waggons or off them, we look forward to welcoming you to the York Mystery Plays, on the 9th, 12th and 16th September and creating a truly immersive experience to take you back to the Medieval times through the streets of our historic city.

Lastly, the plays are funded through the York Festival Trust which is a charitable company, their income is relatively small so the Trust makes up the balance with grants and generous donations from organisations and individuals to make the plays possible.

This year the Trust have been working hard to raise funds to ensure the performances are a success to celebrate the 20th year however, there are still opportunities for donations and sponsorship – including advertising space in the program, sponsorship of the event and individual/corporate donations. If you would like to support the plays and create a year to remember you can donate through the link below or by cheque made payable to York Festival Trust and posted/dropped in to us at Bedern Hall, Bedern, YORK. YO1 7AL